you get trashed a lot here, do you?
can you show me? because we don't allow that here :flowerforyou:

squirt said:
you get trashed a lot here, do you?
can you show me? because we don't allow that here :flowerforyou:[/COLOR]
Click to expand...

Crap! I was so hopping so. BRAAAAAAAAAAHAHAHAHAAA

For the ongoing special counsel investigation into suspected Trump-Russia election coordination, it is helpful to separate what counts: Dust away the atmospherics — supposed Kremlin intrigue — and focus on the collusion charges brought by the former British spy based on his paid intermediaries and Moscow sources. None is identified.

• The Trump campaign launched an “extensive conspiracy” with the Kremlin to interfere in the 2016 presidential election. To date, no public verification.

• Mr. Trump, for decades a developer of tall buildings, maintained an eight-year relationship of give-and-take with Russian intelligence. To date, no public verification.

• Volunteer Carter Page and campaign manager Paul Manafort personally conspired with Moscow to hack the Democrats’ computers. When the hacking began in 2015, neither man was associated with the Trump campaign. Both deny the charge. Mr. Page testified under oath that he had never met or spoken with Mr. Manafort. To date, no public verification of this dossier part.

• Mr. Page, an Annapolis graduate, an energy investor and a former resident of Moscow, traveled to that city in early July 2016 to deliver a public speech at a university. The dossier says he met with two top Kremlin operatives and discussed bribes for working to lift economic sanctions. Mr. Page testified under oath that he had never met nor spoke with them. He has filed libel lawsuits.

• Mr. Trump engaged with Russian prostitutes during a trip to Moscow in 2013. Mr. Trump has denied this numerous times. To date, no public verification.

• Mr. Trump’s personal attorney, Michael Cohen, secretly traveled to Prague in August 2016. His supposed mission: to orchestrate payments with agents of Vladimir Putin to cover up the hacking. At that point, the hacking was known worldwide. Mr. Cohen repeatedly has denied under oath that he took such a trip and showed his passport. He has filed libel lawsuits, including against Fusion GPS. Fusion co-founder Glenn Simpson, who ordered the dossier, has suggested that Mr. Cohen took a private Russian plane and might have been on a yacht in the Adriatic Sea. To date, there has been no public verification of any of this.

• Russian tech entrepreneur Aleksej Gubarev, owner of XBT Holding, hacked the Democrat Party computers with spyware and pornography. He has denied this repeatedly. He sued Mr. Steele for libel in a London court, where the former spy said the information was raw call-in information and not verified.

• Three Russian oligarchs and shareholders in Alfa Bank were involved in Russian election interference and paid bribes to Mr. Putin. They deny the charges and have filed libel lawsuits.

• Mikhail Kalugin was chief of the economic section at the Russian Embassy in Washington. Mr. Steele accuses him of being a spy and of funding the hacking with skimmed-off pension funds. He was supposedly whisked out of Washington when the hacking scandal broke in August. Washington associates of Mr. Kalugin told The Washington Times that the diplomat announced his planned departure 10 months beforehand. He and his family returned to Moscow. He now works in the Foreign Ministry. A former senior U.S. government official told The Times that Mr. Kalugin was never internally identified as a spy.

I feel obliged to include a comment from the comments section:

As an American citizen, I want all crimes exposed to the American people and those crimes prosecuted. That said, I always thought that an investigation was meant to investigate a crime committed. I have never in my lifetime ever heard of an investigation to look for a crime.

and now they're saying Flynn didn't lie to the FBI ... his life is in tatters over this
they're also saying that the FBI was conducting a counter-intelligence investigation, not a criminal one
so the President could not have obstructed justice, since there was no criminal investigation

it makes me angry ... angry that we the people have had to go through this hell because SOMEBODY lost an election!

What the trouble-makers don't seem to realize is that time after time as things are proved false, folks are going to stop believing what is being said. The President is human...he WILL make mistakes, but when that happens, I will probably just figure it is just one more lie.

I Seriously feel like I have woke up in the twilight zone I never in all my life seen so many haters . people who are so disrespectful
to a President while the last four Presidents tore are Country down from the inside and sold us out I never heard anyone say anything we've been spied on lied too and in 2008 people lost their homes & jobs are Vets were not being taking care of and I didn't see one person protest or march about it I'd say the last four President did a good job in F----ing up America and now we have a president that wants to put ((Americans First)) ya'll have something to say Please give me a break where were you when 3000 people were killed in 9-11 or when are guys were killed in Benghazi and I could go on and on.
it's time to wake up people a country divided can not stand Stop the insanity...

I can't sit quietly by while the President is falsely trashed AGAIN! Jonathan Pie (See the video section) knocked him for just offering prayers. What else is he supposed to do? He can CALL for certain legislation, but he can't just impose it on people. The second amendment has been around a long time and there weren't any problems, so why are there problems now? THAT is what needs to be addressed! The call for improved mental health treatment IS a good first step. Unless one is without money and getting support or one has plenty of money, the help is not there for a troubled person....until he snaps. President Trump didn't just ignore the incident...or give a speech written by a staff speechwriter, within days he was there reaching out.

and you can guarantee he is already looking for viable solutions that don't include our ineffective Congress!

what is sad to me is that they came out with this Russian indictment for a reason, that was to show the American people just how well Russia played us, they were extremely successful at pitting us against one another, and we helped ... still are ...

Feel blessed, fellow Americans that you have a man who does what he promised. We, in Canada, have an idiot who worships dictators and murderers. He also loves to dress as a clown. No, the part of Canada where I live didn't elect him in.

Your President lowered the taxes, our taxes went up. Your President is working hard to bring back industries in the U.S. Our IDIOT made it worse to establish new businesses.

Your President is making sure there won't be any more illegal aliens, our Prime idiot is opening the doors wide open.

Hard-nosed political views should not be sneered at, specially after years of laissez-faire (ho-hum). That type of thinking is a sure way of destroying the fundamental values of a country.

LilMissPurrfect said:
We, in Europe, and especially the Swedish people would like to know what specifically happened last friday in Sweden... :noidea: :huh:
Click to expand...

I think what he said about creating a "space force" was really funny. I can imagine the late night shows the moment he uttered it. just to be clear i hate "late night shows" because most of the host are hypocrites and out of touch.

Feel lucky that your President isn't dressing like a clown everywhere he goes.
Trump is determined to bring the U.S.A back to where it should be. Drain the "swamp" created by years of Democratic bullshit, which involves every level of bureaucracy, whether social or investigation.

Today, I watched the segment of the campaign against opiods. He's against drugs, our ******* Prime Minister is legalizing them.

I'd hate to see how fast Trump could solve a logical problem, but I would laugh my ass off if I challenged our idiot Turdeau (no, not a typo).
.

President Trump is under fire for sending the National Guard to the border to stop a "convoy" of 1,000+ Central Americans from staging a organized invasion across the US/Mexican border.
Isn't that an act of war?
Shouldn't we oppose it with force?
Oh I know the EU hasn't done that and that Merkel has allowed the invasion of Mid-Easterners into Europe. And look where that has gone!

You can't get any more accurate than this

This is straight forward country thinking.

Which side of the fence?

If you ever wondered which side of the fence you sit on, this is a great test!

If a Republican doesn't like guns, he doesn't buy one.

If a Democrat doesn't like guns, he wants all guns outlawed.


If a Republican is a vegetarian, he doesn't eat meat.

If a Democrat is a vegetarian, he wants all meat products banned for everyone.


If a Republican is homosexual, he quietly leads his life.

If a Democrat is homosexual, he demands legislated respect.


If a Republican is down-and-out, he thinks about how to better his situation.

If a Democrat is down-and-out he wonders who is going to take care of him.


If a Republican doesn't like a talk show host, he switches channels.

A Democrat demands that those they don't like be shut down.


If a Republican is a non-believer, he doesn't go to church.

A Democrat non-believer wants any mention of God and religion silenced.

If a Republican decides he needs health care, he goes about shopping for it, or may choose a job that provides it

If a Democrat decides he needs health care, he demands that the rest of us pay for his.


If a Republican is unhappy with an election, he grumbles and goes to work the next day.

If a Democrat is unhappy with an election, he burns down a Starbucks, throws rocks at cops and takes two-weeks off for therapy.


If a Republican reads this, he'll forward it so his friends can have a good laugh.

A Democrat will delete it because he or she is offended."

Tsalagi said:
President Trump is under fire for sending the National Guard to the border to stop a "convoy" of 1,000+ Central Americans from staging a organized invasion across the US/Mexican border.
Isn't that an act of war?
Shouldn't we oppose it with force?
Oh I know the EU hasn't done that and that Merkel has allowed the invasion of Mid-Easterners into Europe. And look where that has gone!
Click to expand...

I couldn't be more proud! and here's why: California said we gotta think about it, Oregon said they'd say no if asked (nobody asked!), and Texas said ON THE WAY! lol and Arizona said ME TOO! lol

(I reside in Texas, but was born in Arizona lol)

"Hold my beer
and watch this!"

Please Mr Trump DO NOT start WW3 with Putin over Syria or any other country!

Please Mr. Chamberlain DO NOT start WW2 with Hitler over Poland or any other country! (The Rhineland, Austria, Czechoslovakia, etc.) 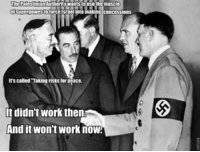 Tsalagi said:
Please Mr. Chamberlain DO NOT start WW2 with Hitler over Poland or any other country! (The Rhineland, Austria, Czechoslovakia, etc.)