A vegan once said to me, "People who sell meat are disgusting."

I said, "People who sell vegetables and fruits are grocer." 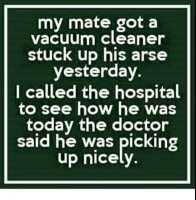 It was the coldest winter ever. Many animals died because of

the cold. The porcupines, realizing the situation, decided to

group together to keep warm. This way they covered and protected

themselves; but the quills of each one wounded their closest companions.

After a while, they decided to distance themselves one from the

other and they began to die, alone and frozen.

So they had to make a choice: either accept the quills of their

companions or disappear from the Earth.

Wisely, they decided to go back to being together. They learned

to live with the little wounds caused by the

close relationship with their companions in order to receive the

heat that came from the others.

This way they were able to survive.

The best relationship is not the one that brings together perfect

people, but one in which each individual learns

to live with the imperfections of others and can admire the

The moral of the story is:

Just learn to live with the Pricks in your life!
T

I was sitting on the toilet, exhausted, and late for work..

What’s the cheapest meat you can buy?

These are the pie rates of the Caribbean.
T

What do you call a fat psychic?

So, my twin brother just called me from prison..

He said, "So you know how we tend to finish each others' sentences?"
T

How many passive-aggressive people does it take to change a light bulb?

Upon taking a seat at the bar, the exec noticed that each stool had

a number painted on it. Sitting next to him was a rather depressed

looking gentleman and an attractive young woman who was obviously

and asked if he knew the purpose of the numbers.

"Sure," the guy said. "Every half hour, the bartender spins a wheel

surprised customer. "Have you won?" 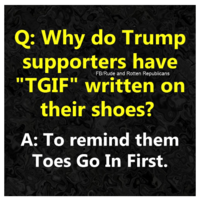 Pence: "No, not the human rights violating despot, the one who said you were inept."

Trump: "What a relief. Tremendous news. When are they executing him?"
T

What is the number one cause of dry skin??

But then I was like Na, people wont understand.
T

I asked 100 women which shampoo they preferred..

Their number one answer was -

Got home to find my wife had left a note on the fridge that said, "This isn't working. I'm going to my mum's."

I opened up the fridge. The light was on and the beer was cold, I'm not sure what she was talking about.
T

My wife left me for being unnecessarily mysterious..

A man walks into a library and asks for books about paranoia..

"They're right behind you!", says the librarian.

The umpire during the mixed double stopped the match due to there being 4 balls on one side of the court.

However once Andy Murray and Serena Williams adjusted their underwear, normal play resumed.

and finally she agrees to go out with him. He takes her to a nice

restaurant, buys her a fancy dinner with expensive wine and on the way

home he pulls over to the side of the road in a secluded spot.

They start necking and he's getting pretty excited. He starts to

reach under her skirt and she stops him, saying she's a virgin and

wants to stay that way.

"EEEEyyyyyyeeeewwwwwww!" she screams. "I'm not putting that

thing in my mouth!"

"Well," he answers, "remember when you were a kid and you used

to shake up a Coke bottle and spray your brother with it?"

So he pulls it out and she grabs hold of it and starts shaking it.

A few seconds later, his head flops back on the headrest, his

eyes close, snot starts to run out of his nose, wax blows out of

his ear and he screams out in pain.