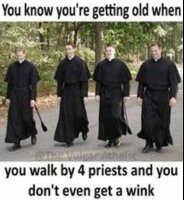 Do you know why God created men?

Because vibrators don't take out the trash.

A woman goes to the post office to buy stamps for her Christmas cards.

She says to the clerk, "May I have 50 Christmas stamps?" The clerk says,

"What denomination?" The woman says, 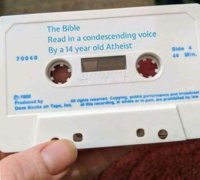 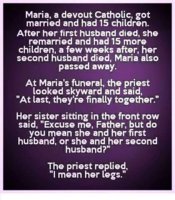 A guy dies and goes to heaven. When he gets there, St. Peter says "we're really crowded up here, so you'll have to answer some questions to get in." First question. How many days of the week start with 'T'? The guy says "two, today and tomorrow." St. Peter says "That's not quite what I had in mind, but I like the way you think." Second question. How many seconds in a year? The guy says "12, the second of January, the second of February, the second of March..." Now St. Peter really wants to stump the guy, so he asks "What is God's first name?" The guy replies "That's the easiest question of all, it's Andy." St. Peter says Why do you say Andy?" The guy says "It's right in the song...Andy walks with me, Andy talks with me."

A nun met a Scotsman one day, and as he was sporting a kilt, curiosity got the better of her and she asked him what was under it.
"You'd better have a feel for yourself", he tells her, so she went ahead and delved in.
"Ugghh!!" she said, "It's gruesome!"
"Aye lass," he replied happily, "It just grew some more...!"

Why do you always see two nuns together? You never see one nun alone?Because one nun has to make sure that the other nun don!t get none. 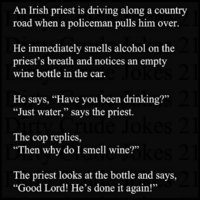 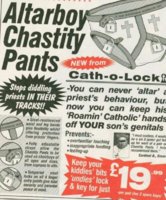 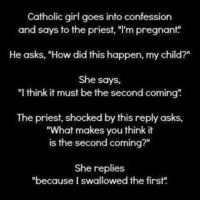 A Catholic boy in confession says, "Bless me Father, I have sinned, I masturbated while thinking about my sister."
"That's a disgrace," said the priest, "especially when you have two gorgeous brothers."

In a London Nursing home an old Priest lay dying.

For years he had faithfully served the people of the Nation's Capital.

He motioned for his Nurse to come near. "Yes, Father?", said the Nurse.

"I would really like to see Theresa May and David Cameron before I die", whispered the Priest.

"I'll see what I can do, Father" replied the Nurse.

The Nurse sent the request to No 10 and waited for a response.

Soon the word arrived; Theresa and David would be delighted to visit the Priest.

As they went to the hospital, Theresa commented to David,

"I don't know why the old Priest wants to see us, but it certainly will help our images".

David agreed that it was the right thing to do at this time. When they arrived at the Priest's room, the Priest took Theresa's hand in his right hand and then David's hand in his left.

There was silence and a look of serenity on the old Priest's face.

The old Priest slowly said: "I have always tried to pattern my life after our Lord and Saviour, Jesus Christ".