My wife said to me,"What the hell are you doing?"
I said,"I'm doing that thing where you fart into a container before puttingthe lid on,it's a laugh."
She said,"Fucking get out of my Mother's coffin."

My son is such a selfish, miserable bastard.
Bought him a trampoline for Christmas and all he wants to do is sit in his wheelchair and cry.

After suffering depression for a while, me and the wife were going to commit suicide yesterday.
But strangely enough, once she killed herself.
I started to feel a whole lot better.
So I thought, fuck it, I'll soldier on.

If you're wondering what to do with your Turkey carcass after Christmas...
Pop it in your bed and imagine you're David Beckham.

I don't think so lol

On second thoughts it wasn`t the best plate to buy anyone. 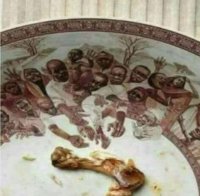 Very old grannies ( All models alive at time of filming )

Three Aussie blokes working up on an outback mobile phone tower: Mongrel, Coot and Bluey.
As they start their descent, Coot slips, falls off the tower and is killed instantly.
As the ambulance takes the body away, Bluey says, 'Hey mate, someone's gotta go and tell Coot's wife..
Mongrel says, 'OK, I'm pretty good at that sensitive stuff, I'll do it.'
Two hours later, he comes back carrying a case of Beer.
Bluey says, 'Where'd you get the grog, Mongrel?'
'Coot's wife gave it to me,' Mongrel replies.
'That's unbelievable, you told the Missus her husband was dead and she gave you a case of beer?'
'Well, not exactly', Mongrel says.
'When she answered the door, I said to her, "you must be Coot's widow."
She said, 'You must be mistaken. I'm not a widow.'
Then I said, 'I'll betcha a case of beer you are.'
Aussies are good at that sensitive stuff.

I went to see a psychic last night.

She looked at me and said, "In five years time you will have 3 children."

"But I already have 4 children!" I laughed.

She said, "I know, leukemia is a bastard."

Dave took his wife and daughter away for a weekend in the caravan.

"Any chance of a blow job?" Dave whispered to my wife when we were in bed.

Stephen Hawking went on his first date the other day, he came back with a broken nose, smashed glasses and a dislocated hip...

She stood him up.

A guy starts a new job, and the boss says, "If you marry my daughter, I'll make you a partner, give you an expense account, a Mercedes, and a million dollar annual salary."

The guy says, "What's wrong with her?"

The boss shows him a picture, and she's hideous.

The boss says, "It's only fair to tell you, she's not only ugly, she's as dumb as a wall."

The boss says, "I'll give you a five million dollar salary and build you a mansion on Long Island."

The guy accepts, figuring he can put a bag over her head when they have sex.

About a year later, the guy buys an original Van Gogh and he's about to hang it on the wall.

He climbs a ladder and yells to his wife,

The guy says, "Get me some nails."

I looked out of my window and saw a group of people gathering around a bloke who came off his motorbike, so I frantically rushed over.
"Out of the way!" I shouted, as I pushed through the crowd.
"Are you a doctor?" one woman screamed.
"No" I replied, " hes got my pizza.
You must log in or register to reply here.
Share:
Facebook Twitter Reddit Pinterest Tumblr WhatsApp Email Link
Top