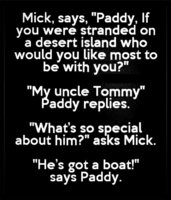 Paddy is ploughing his field with a steam roller.
Seamus says, "Paddy you don't plough a field with a
steam roller you daft fecker."
Paddy says, "I am growing mashed potatoes you
thick b*****d." 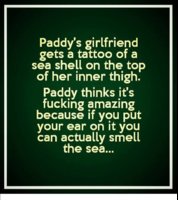 Three dead bodies turn up at a mortuary all with very big smiles on their faces and the police call on the coroner to investigate.
"First body," says the coroner, "Pierre Dubois, Frenchman, 70, died of heart failure while making love to his 20-year old mistress. Hence thesmile,' says the Coroner.
"Second body is Gregory Campbell, Scotsman, 25, won £50,000 on theLottery. Spent it all on whisky. Died of alcohol poisoning, hence thesmile." he says.
The Police Inspector asked, '"So what about this third body?'"
"Ah," says the coroner, "this is the most unusual one. Paddy Murphy, Irish, 30, struck by lightning."
"Why the broad grin, then?" inquires the Inspector.
"He thought he was having his picture taken".

Mary was asleep in bed when her husband, Patrick, crashed through the front door at 3 am waking her up. He staggered through the hallway and tried to get up the stairs.

'What are you doing?' Mary shouted.
Patrick replied, 'I'm trying to get this gallon of beer up the stairs.'

'Leave it down there, Patrick', Mary bellowed. 'I can't, 'Patrick replied, 'I've drunk it.'

​
Reilly's Bar: Due to the sad death of Shamus, the bar to all intents and purposes, will remain closed during our grief, but so as not to inconvenience our esteemed customers, the door will remain ajar. Tis what Shamus wanted.

Thank you. The Reilly family.

Six retired Irishmen were playing poker in Monaghan's flat in Dungarvan when Sean O'Toole loses €700 on a single hand, clutches his chest and drops dead at the table.

Showing respect for their fallen brother, the other five continue playing standing up. Michael Lennon looks around and asks, 'Oh, me boys, someone's got to tell Sean's wife. Who will it be?'

They draw straws. Cavan Colquhoun picks the short one. They tell him to be discreet and gentle and not to make a bad situation any worse.' Discreet? I'm the most discreet Irishmen you'll ever meet. Discretion is my middle name. Leave it to me.' announces Cavan.

He goes over to O'Toole's house and knocks on the door.
Brenda O'Toole answers and asks what he wants. Cavan declares: 'Your husband just lost €700 and is afraid to come home.'

Niall and Ethan are two young lads from Shannon and they are lost in the Sahara desert. they're only desperate for water, but just as they think they're about to die, they chance upon an oasis where market day appears to be in full swing.

They go to the first stall they see, and Niall asks if they can buy some water.' No, 'replies the Bedouin stall owner, 'I only sell fruit. Try the next stall.'

So off they stagger to the next stall and this time Ethan asks for some water. 'Sorry,' says the merchant, 'But I only sell custard'. 'Custard! Custard?' splutter the two.

Niall turns to Ethan and shouts angrily, 'What kind of flippin' place is this?' By now totally desperate, they go to the next stall, only to be told, 'Sorry, but I only sell jelly.' Hearing this, Ethan says to Niall and speaks through clenched teeth, 'Bejabbers, Niall - this is a trifle bazaar.' 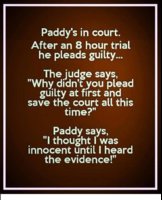 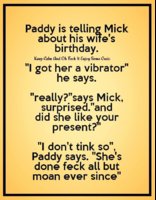 Paddy is at the airport with a sack over each shoulder and when he is stopped at customs they find that both sacks are full of mobile phones. When asked why Paddy said, "Well, while I was on my travels in America, I got a phone call from my mate Murphy in Cork and he told me that he is starting up a jazz band and could I bring him back two saxophones." 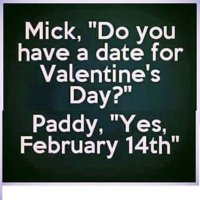 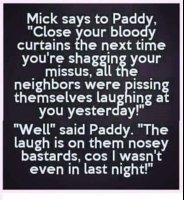 A Texan walks into a pub in Ireland and clears his voice to the crowd of drinkers. He says, "I hear you Irish are a bunch of drinkin' fools. I'll give $500 American dollars to anybody in here who can drink 10 pints of Guinness back-to-back."
The room is quiet and no one takes of the Texan's offer. One man even leaves. Thirty minutes later, the same Irishman who left shows back up and taps the Texan on the shoulder.
"Is your bet still good?", asks the Irishman.
The Texan says "Yes," and he asks the bartender to line up 10 pints of Guinness.
Immediately, the Irishman tears into all 10 pints of beer, drinking them all back-to-back.
The other pub patrons cheer as the Texan sits down in amazement. The Texan gives the Irishman the $500 and asks, "If ya don't mind me askin', where did you go for that 30 minutes you were gone?"
The Irishman replies, "Oh... I had to go to the pub down the street to see if I could do it first!!