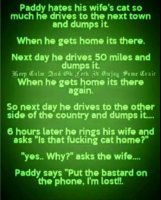 Paddy charges into the benefits offìce ."I've been ringing 0800 1730 for 2 days now . Why the feck doesn't anybody answer !" . Girl replies . "Those are our opening times you daft twat.

Paddy went to a bank for a loan and the cashier says to him, "Im sorry but the loan arrangers off today sir." Paddy replies, "Ok, I'll talk to Tonto if he's in." 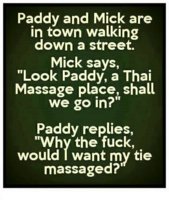 Paddy says to Mick, "How did you get on at the faith healing group last night?". Mick replies, "It was absolutely shite, even the feller in the wheelchair got up and walked out". 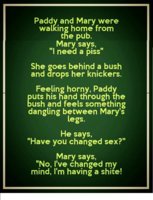 Ireland is one of the wettest places on earth. If you see an Irishman with a tan, it's fucking rust!

An Irishman walking along the beach found a bottle lying in the sand. He picked it up, brushed it off, and out popped a genie. “Since you have freed me from this bottle, I will grant you three wishes.”
The Irishman thought a moment and said, “I’m feeling a might thirsty. I think I’ll wish for a pint of stout.” And poof! there was a pint of stout in his hand.
He drank it down and started to toss the bottle away, when the genie said, “Look at that bottle before you throw it away.” He did and watched as it magically refilled itself with stout. “That’s a magic bottle. It will refill itself whenever you empty it. So what are your other wishes?”
The Irishman grinned. “I’ll be taking two more of these!”

I was speaking to an Irish guy who had just robbed a bank in the pub today. He said, "It was easy, I just walked through the door with a gun in my hand."

I said "Was it a revolver?"

"No, it was just a normal door." He replied.

A wealthy Irish farmer sends his daughter to a French finishing school. She's there a few months when she sends her father a letter saying : " Dear Father, please send me some money as I've just got engaged to a French Count "

He wrote back : " I'm sending you bugger all until you learn to spell properly 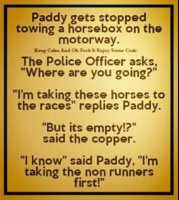 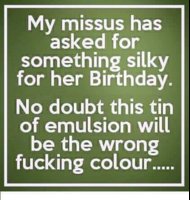